“A mess can be what does not appear.”

A map might suggest possible destinations, but there is no promise that you’ll arrive or that your destination might not change along the way. Travel is messy; Straight lines and Straight time are constructions, elisions of lived experience.

The wizards of weather tracking covet their esoteric maps.

This map describes 7 AM. At 8 AM, the map is no longer relevant. 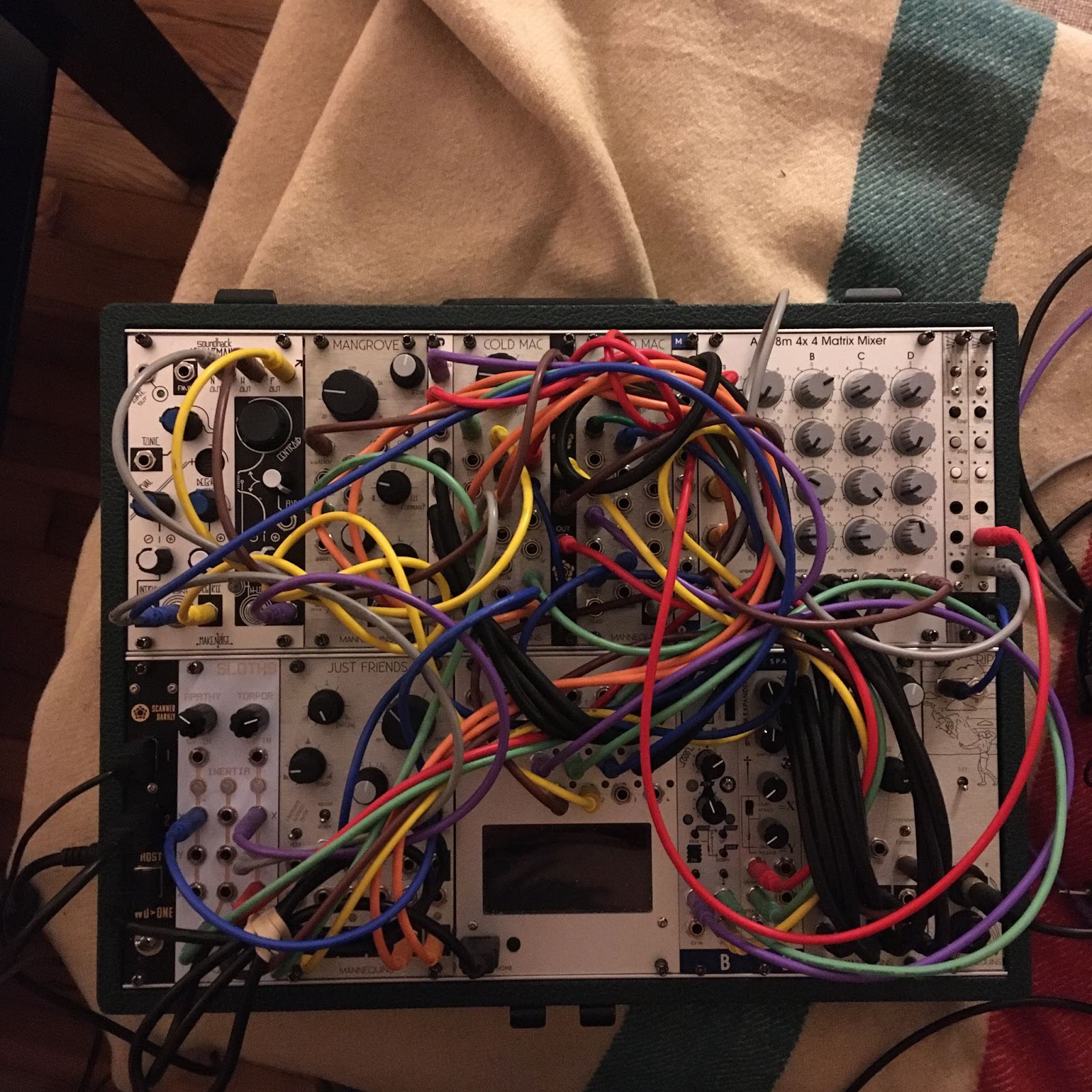 The modular synth patch can be similarly fleeting. It is a moment in time, it spans a geography but it shifts with the sands in the hourglass. Like the weathermap, it is esoteric, yet even the human hands that drew it may not fully grasp what it describes. “This is a mess!” said with derision, or with delight.

A mess can be a picture of life.”

Mapcore can be many things to many people. To most people, it is no thing. Let’s look at maps in Teletype: 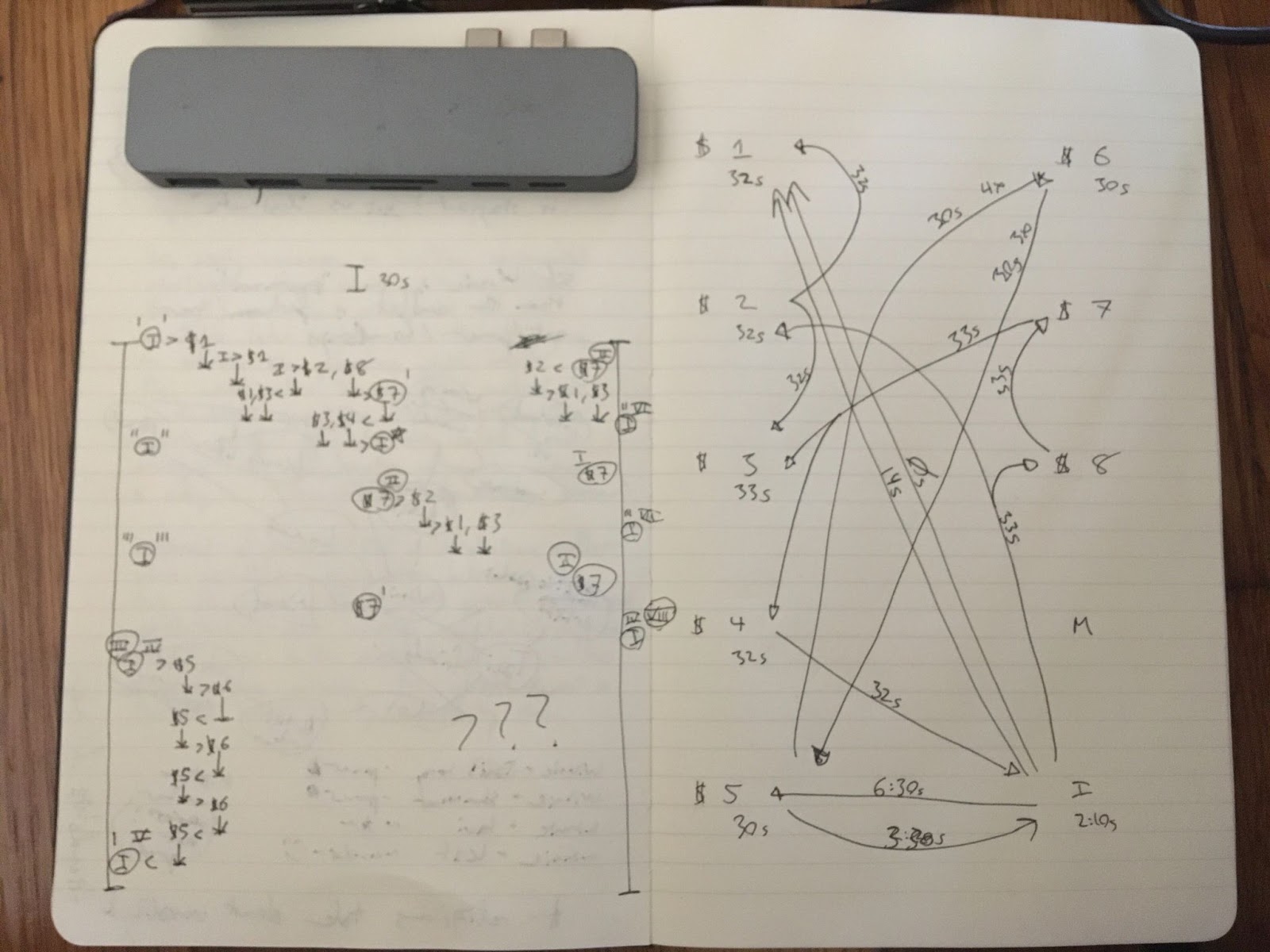 This map describes a recursive script designed using DEL X: $ $ and EVERY Y: BREAK (foundational mapcore sacred knowledge *) to play itself for exactly 20 minutes and then stop.

* “sacred” but not “secret” — SHOW UR SCREENS. Mapcore is esoteric but not exclusionary, one of its many ironies and contradictions.

The first map that was drawn was in Teletype — tracing the recursive scripts from one to the next as they call each other successively and recursively. These traces were drawn by hand, surely the cartographer knows the way? Not so. The way was obscure, the time to the destination was always different, never adding up to the cartographer’s calculations. So the mapmaker set about making another map, seen on the right side of the image — these are the eight locations, how do we get from one to the next and back again, and how long does it take? Something was revealed in the spatial map, but no answers. A timemap was next (on the left), which similarly revealed something, but no answers. A linear map can only hint at a nonlinear destination — note the “???” as the cartographer loses the trace — HERE BE DRAGONS.

There is something intrinsic to queerness in accepting fluidity and change, understanding self and identity as something that morphs over time and shapes and is shaped by experiences, rather than being a single thing set in stone over a lifetime. Imagine Mapcore, like identity, as an undefineable and ever unfinished journey rather than a destination. Maps that are more about imagining things in space, and illustrating the fluidity of space, rather than treasure map style [YOU are here: THIS is the destination]. Those treasure maps are a Hollywood construction — after all, wasn’t the real treasure the friends we made along the way?

Here, I am using the cyclical sequencer scene to trigger various fifths and octave notes from JF, which is set to a low enough octave that the lowest notes are almost sub audio, and the ramp and FM dials are finding a perfect sour spot of cacophonous FM. I made this sound. It was Nasty. Not in a good way. I didn’t like it. This is then sent to Clouds, which adds extra glitching. I am manipulating the trigger patterns and pattern lengths of the four sequencer channels in real time.

There is something about queerness that embraces the sour spots, the messes, the places on the map where some might be lost, others can be found — homes can be found.

Sara Ahmed, again: “What we find, how we find: queer maps are useful to queer people because they tell us where to go to find queer places, places that come and go, providing temporary shelters, gay bars can be our nests. We need queer spaces because we need not to be displaced by how organisations, also worlds, are occupied; yes, compulsory heterosexuality can still take up space; time, too. If queer maps are useful because they tell us where to go to find queer spaces, queer maps are also created by use. Perhaps those messy lines are also desire lines that tell us where we have been, what we found, who we found, by going that way, by not following the official paths we are told would have opened doors or eased our progression.”

Make an unpleasant sound, tangle an unintelligible knot, make a huge mess and give yourself the time and space to explore it. This may or may not be mapscore.